The Soviets first encountered Zimmerit late in 1943 on Tiger tanks and Panzer IVs. Examining 5 Tiger and 15 Panzer IVs, the Soviets found that the Tigers were covered across the glacis, lower plate, hull sides, turret sides and even the track guards with this grey substance. Measuring it though they found it to be just 2-4mm thick. Of the 15 Panzer IVs captured with Zimmerit, two also had this material on the armored screens mounted on their turrets as well. 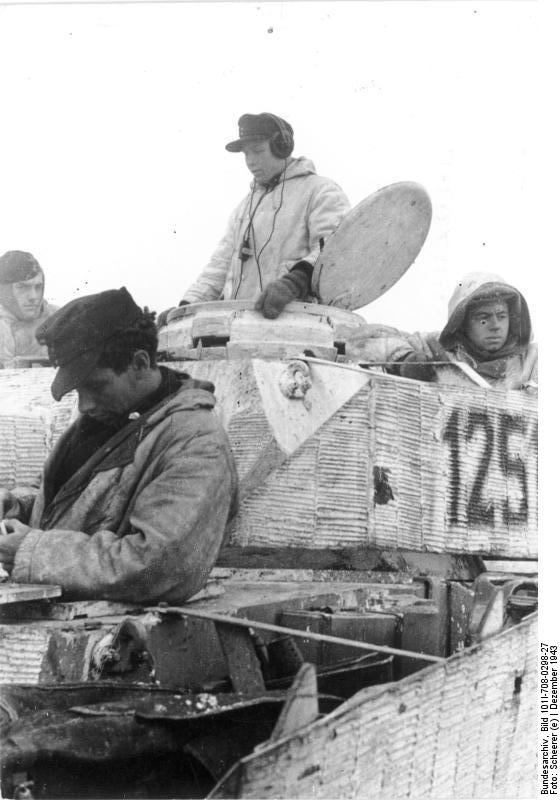 A well ‘zimmeritted’ Panzer IV on the Eastern Front, with Zimmerit on the hull and Schurzen as well as the turret screens
The Soviets were initially confused as to the purpose and make-up of the material, but quickly established that it would neither burn nor dissolve (although it would get softer in hot water). Far from thinking it to be a fire hazard, the Soviets initially suspected Zimmerit was some form of protection from incendiary bottles or camouflage, two things the British also considered later.
German records indicated that Zimmerit consisted of 40% Barium Sulphate, 25% Polyvinyl Acetate, 15% Ochre pigment, 10% Zinc Sulphide,
10% Sawdust. The Soviets examining both burned and unburned samples of Zimmerit in April 1944 (the samples provided to them from the front were rather small) found the material to have a melting point of 1100C and to consist of:

The Soviet scientists did not receive very much Zimmerit to test but from what little they did have they made two assumptions. One was that the ridges may serve to concentrate the liquid and or heat from flammable liquids. This may melt the coating to extinguish the fire. The other one was that Zimmerit was some kind of winter camouflage due to the greyish color of the material.
Other vehicles found by the Soviets with it included the Panzer S35 and Panzer 38H, both of which were notable enough to be documented with at least one sent to Kubinka for trials, testing, or display.

Former German Army Panzer 38H(f) on show at the Kubinka testing ground in 1945, sporting a coat of either Zimmeritt or Cement 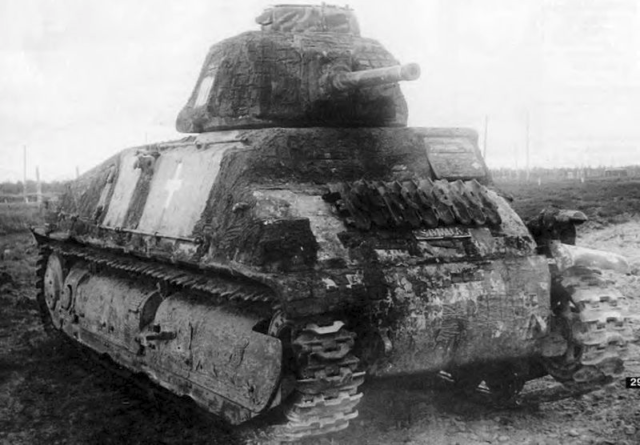 Former German Army Panzer S35 in Soviet hands, date unknown. Reportedly captured in Summer 1944 with a coating of either Zimmerit or Cement.
Whatever else they may have thought of it though the Soviets do not seem to have been either concerned or impressed by the material. It is possible they did some further testing with it, they probably had more pressing issues to deal with. 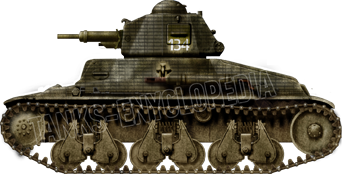 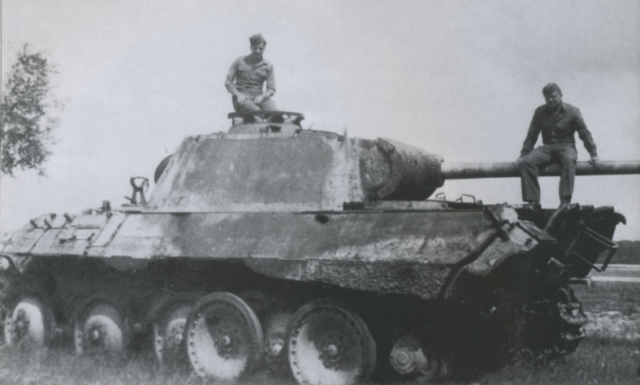 Germany 1945, this Panther Ausf.A has suffered a significant fire resulting from enemy fire which has scorched off the Zimmerit coating from the hull and turret side.

One note of particular interest was the unusual application of Zimmerit to a couple of T-34s. In November 1944, the Germans conducted some limited trials of Zimmerit to test the veracity of the ‘flammability’ rumors. Two captured Soviet T-34 tanks were used for the tests.
T-34 number 1 had Zimmerit applied by the manufacturer, consisting of multiple layers which were properly hardened by means of a blowtorch. T-34 number 2 has just a single layer of Zimmerit applied by range staff in a single layer and left unhardened.
Tank number 2 was then left for 4 days and was completely cold (just 5 Celsius) before the armor was heated with a blow lamp and a welding torch for a period thirty seconds, which resulted in 3-4 seconds of small flames and a slight afterglow. The flames were probably a result of burning off of some of the residue which had not evaporated due to the cold weather, as it was reported that the smell of solvent could still be felt at this time.
The vehicle was left for another 2 days, after which it was heated by means of a camp fire made inside the vehicle. This raised its temperature to about 35 Celsius, and then the vehicle was again blowtorched.This time there were about 20 seconds of small flames and a slight afterglow. It is surmised that the preheating to 35 degrees released all the remaining solvents which were the cause of the flames.
This solvent flammability was found again during testing of ‘wet’, freshly applied, undried Zimmerit. Immediately after application, it was found to burn easily across the whole tank, but was also easily extinguished with just sand. The solvent in wet Zimmerit was, of course, flammable, so this is not a surprising result. Despite these tests and the resultant burning, it was found that the intermediate layer of Zimmerit still did not burn.
After these very elementary tests were finished, some firing trials were carried out on these vehicles with a variety of shells from both the 7.5cm PaK40 and the leFH18, at a range of 250 metres:

At no time, from any of the impacts on either vehicle, did the Zimmerit catch fire. It was chipped off at the point of impact though and the overall conclusion of the testers was that Zimmerit was not the cause of fires in German tanks.
These German tests therefore sadly do not confirm the Soviet theory about how Zimmerit worked. The camouflaging element was essentially forgotten and the Soviets were winning anyway so wasting time on Zimmerit would have been nothing but a distraction for the Soviets. Despite the results of the tests proving Zimmerit wasn’t flammable, the Germans too dropped it.

Part I: Zimmerit in German Use
Part III: British work on Zimmerit
Part IV: US work on anti-magnetic coatings

This website uses cookies to improve your experience while you navigate through the website. Out of these cookies, the cookies that are categorized as necessary are stored on your browser as they are essential for the working of basic functionalities of the website. We also use third-party cookies that help us analyze and understand how you use this website. These cookies will be stored in your browser only with your consent. You also have the option to opt-out of these cookies. But opting out of some of these cookies may have an effect on your browsing experience.
Necessary Always Enabled
Necessary cookies are absolutely essential for the website to function properly. This category only includes cookies that ensures basic functionalities and security features of the website. These cookies do not store any personal information.
Non-necessary
Any cookies that may not be particularly necessary for the website to function and is used specifically to collect user personal data via analytics, ads, other embedded contents are termed as non-necessary cookies. It is mandatory to procure user consent prior to running these cookies on your website.
SAVE & ACCEPT
56 shares