Probably one of the more unusual elements of German tanks of WW2 is the substance known as ‘Zimmerit’. This unusual material which many tank enthusiasts and modellers have heard of but do not really know much about is as interesting as it is complicated.
The substance known as Zimmerit is referred to as a non-magnetic coating designed to prevent magnetic mines from adhering to the armor of the tank. Zimmerit first appears in 1943. The DB and Alkett factories started applying it from about November 1943 and an order from the German High Command, OKH (Oberkommando des Heeres), dated the 29th December 1943, called for Zimmerit to be applied to tanks, albeit not on the turrets or track guards. A British wartime report from 1945 later confirmed that development of Zimmerit had begun in 1943 as a counter to Russian infantry assault teams using mines held in place by magnets against German tanks. 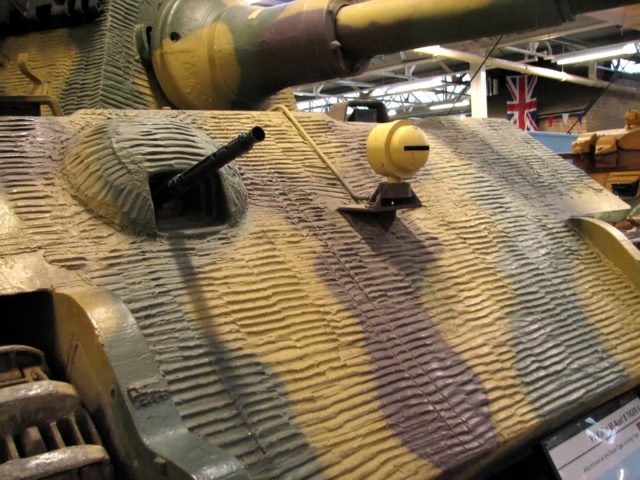 Tiger II at Bovington showing its hull and turret Zimmerit.

The original order was just to cover the hull of the tank. This is logical as the hull would be the easiest part to reach for enemy infantry armed with magnetic charges. In practice however, it was often applied all over parts of the vehicle, including track guards and turrets, in a wide variety of patterns often varying on a single vehicle. 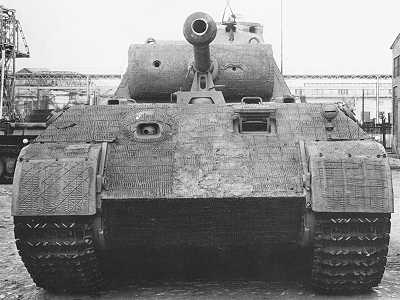 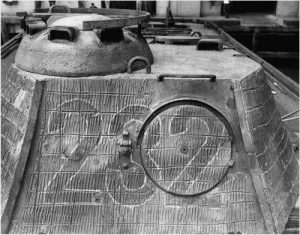 Different styles of Zimmerit application on the back of the turret of a Panther. Note that neither the cupola nor the roof are coated with Zimmerit.
The actual substance was a mixture of materials almost certainly developed by the firm of C.W. Zimmer AG, Berlin (a well known manufacturer of paints) and is a mix of: 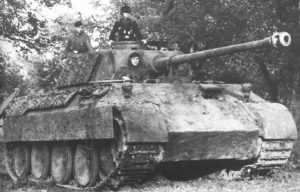 Unusual application of Zimmerit to side ‘Schurzen’ on these Panthers 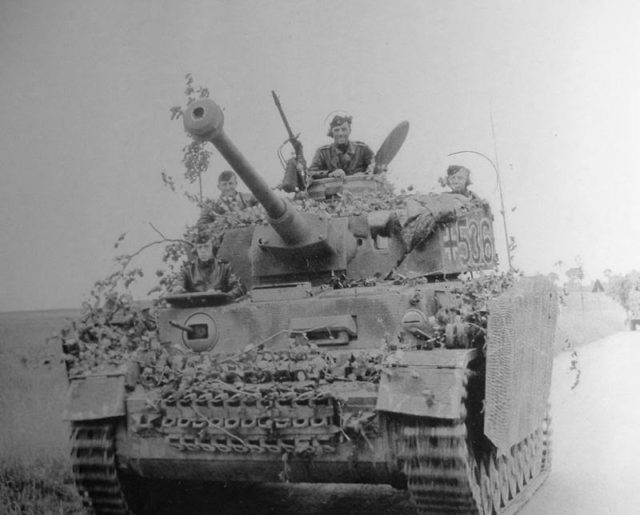 An unusual Panzer IV with Zimmerit covering its Schurzen side plates
The paste itself had an unpleasant smell of acetone, but was easy to handle and put onto the vehicle, requiring no preparation of the bare metal surface beforehand. In practice though, a non-corrosive primer was usually applied over the metal surface before the Zimmerit.
This mixture was pasted onto the surface of the vehicle in two applications. The first layer was to be 5mm thick and left to dry for 24 hours, marked out in squares with a metal trowel. A second coat was then applied over this and marked with a metal comb, in order to create a criss-cross pattern to improve adhesion to the first layer. The entire coating was then dried and hardened with a blowtorch. It took less than an hour with a blowtorch to evaporate off the solvents used in the paste and leave it dry, but the whole application, texturing and drying process took a couple of days per vehicle. Even if it were not blowtorch dried, the paste dried out anyway and reached normal hardness within eight days.
Applied correctly, this mixture created a rough hard raised textured surface. It provided not only a poor contact surface for mines, but the texturing also gave a good camouflage finish. Even a small distance between the magnet and the vehicle body reduces the effectiveness of a magnet. This combined with the irregular surface concerned and movement over terrain, was probably quite effective as protection against magnetic weapons.

Factory application of Zimmerit on a Panther

In August 1945, a British team was investigating Zimmerit as a possible means of protection against the Japanese use of magnetic mines in the Pacific. Information had started to be gathered on the substance soon after it was discovered on captured and knocked out enemy vehicles, with samples scraped off and sent for analysis in 1944. Further to the intelligence work on captured samples of Zimmerit, German POW’s had also revealed some of the use of the substance, but it was not until the 14th August 1945 that the British team managed to get some substantive information on the development of Zimmerit and where it came from. That was the day that the British team finally got to the Henschel works in Kassel in Germany. Here the team interviewed the Director of Production about Zimmerit. He recounted that the paste itself was supplied to the Henschel works in drums directly from Chemische Werke Zimmer in Berlin (although other plants were also involved in the manufacture) and had the consistency of soft putty. 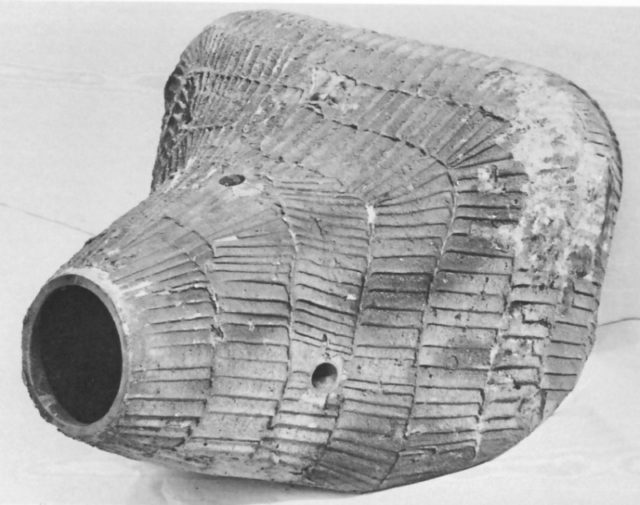 Detailed photo of the Saukopfblende gun mantlet from a Jagdpanzer IV showing Zimmerit
The Director of Production revealed that he had thought the order to discontinue the application of Zimmerit was due to the development by the enemy of better anti-tank weapons, rather than because of any safety, production or effectiveness concerns. The order in question had been issued by the OKH on the 9th September 1944 following rumors of Zimmerit causing fires or being flammable. Later German tests would show this to be completely false, but, in either case, there was a significant quantity of Zimmerit left at the Henschel works and the British liberated some 100 tons of it from there. Zimmerit was officially discontinued for factory application from the 9th of September 1944, however, there must have been quantities shipped out to units, as it was not ordered discontinued for field application (which would include foreign maintenance depots and even factories) until the 7th of October. 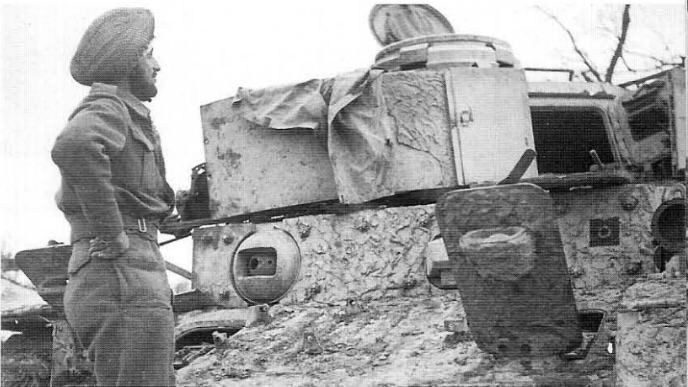 It is possible that many vehicles got rushed through the application process. As a result some may only have received a single layer of the material due to the constraints on production, or supply. It’s also likely that many vehicles were partially through the process in the factory when the order to discontinue came in. Even at the factories, given the novelty of the material and quality control issues, it is also likely that many vehicles did not get a sufficiently thick two-layer coating. A thin single coating would dry faster so would have aided in speeding factory production. It’s also quite likely that tankers may have imitated Zimmerit on their vehicles using cement. 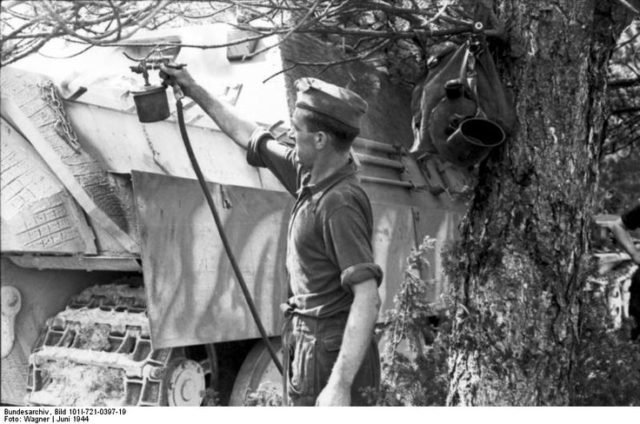 German soldier spray painting camouflage paint over Zimmerit
Once applied though, Zimmerit was surprisingly durable. Many vehicles have been dug up after having been buried for decades in rivers or swamps and still retain traces of it. Even battle damage didn’t blast it off the surface, as a shell would only cause localized loss of the material. 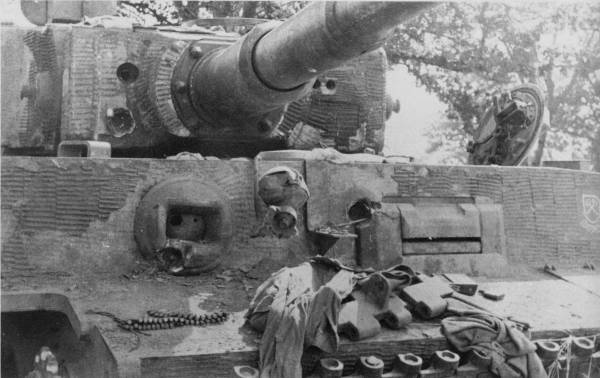 Battle damaged Tiger showing resilience of material to combat damage
Despite the stated purpose of Zimmerit for protecting against magnetic mines, it’s not clear that it actually worked. Neither the British, Russians, nor the Americans made any notable use of magnetic mines to counter German tanks. Whether or not it actually worked for the stated purpose, it was certainly effective as camouflage and this may serve to explain why so many variations of it exist on a variety of vehicles.

9 replies on “Zimmerit in German use”

Maybe the Germans anticipated that the Western powers and the Soviets would developed magnetically attached shaped-charge grenades similiar to their own Hafthohlladung which was able to penetrate 140mm of RHA.

>Aplication and composition
Application, you guys misspelled that one. Anyways, I wanted to say thanks for all of this hard work you guys put into this awesome website!

Is there an explanation for the various patterns used?. Was a particular pattern related to the factory that produced the vehicle or not?.

We don’t know, although that seems plausible.

I’ve wondered for years what and why that coating was there. Now I know!! Thank you!!!

Was zimmerit effective to stop Russian anti-tank rifle rounds? You mentioned resilience against battle damage in the article. Thanks

This website uses cookies to improve your experience while you navigate through the website. Out of these cookies, the cookies that are categorized as necessary are stored on your browser as they are essential for the working of basic functionalities of the website. We also use third-party cookies that help us analyze and understand how you use this website. These cookies will be stored in your browser only with your consent. You also have the option to opt-out of these cookies. But opting out of some of these cookies may have an effect on your browsing experience.
Necessary Always Enabled
Necessary cookies are absolutely essential for the website to function properly. This category only includes cookies that ensures basic functionalities and security features of the website. These cookies do not store any personal information.
Non-necessary
Any cookies that may not be particularly necessary for the website to function and is used specifically to collect user personal data via analytics, ads, other embedded contents are termed as non-necessary cookies. It is mandatory to procure user consent prior to running these cookies on your website.
SAVE & ACCEPT
256 shares