The T33 Cargo Carrier and T13 Armored Utility Vehicle were designed in the United States of America during the Second World War. The T13 and T33 occupy a space in development as transition vehicles in the sense that almost everything Armored Personnel Carrier related that comes before the T13 and T33 was adopted from other designs originally intended as artillery tractors, half-tracks, tanks or, mortar carriers. Although neither vehicle was adopted for mass production, much like those that preceded them, they set the standard and bar for future APCs on what was expected and needed of the vehicle.

The T33 Cargo Carrier and T13 Armored Utility Vehicle (the name was changed to this from Armoured Tracked Carrier) were first mentioned in August 1944 in the British Army Staff (AFV) Situation Report Number 25 from August 18th 1944. At the time, the Armored Board and Armored Centre were interested in a design of an Armored Tracked Carrier, eventually called T13, based upon the M24 Light Tank components. The proposal was for the driver and engine room to be at the front, followed by a body which would be capable of carrying a 13,000 lb (5,900 kg) payload. Its dimensions would enable 9 men to be carried in the body with an additional 2 in the driving compartment.
The armor over the hull of the chassis would be 1” (25.4 mm), whilst the body would be ½” (12.7 mm). The total weight of the vehicle was estimated at 40,000 lbs (18,143.69 kg). Such a Carrier was considered to be particularly desirable for acting as a tender for ammunition and fuel for the M24 Light Tank, which only carried 48 rounds, or as a personnel carrier, or command vehicle in theaters such as China, where the absence of roads placed a premium on tracked vehicles. As of August 18th, 1944, “a layout drawing only has been produced and support for the proposal is now being canvased.”
There were no fully tracked armored personnel carriers being produced anywhere in the world since the Mark IX tank of World War One and APCs based upon the Soviet T-26 in the early 1930s. Walking, trains, trucks, and increasingly, half-tracks were the primary ways to move troops. The Tank Policy for 1945, which was published in July 1944, laid out the main focus for the coming year in the European Theater of Operations (ETO), that focus being on Tanks carrying a minimum of 70 rounds of ammunition. Water stowage for these rounds to reduce the chances of fire was acceptable so long as no less than 70 rounds were carried. Ground pressure was not to exceed 10 psi (0.70307 kg/cm2) and tank design was to be split into two types, light armor and high mobility, and heavy armor and infantry support. The end result of the requirements from July 1944 was that the M4A3 Medium Tank and M24 Light Tank fitted the lighter requirements well. At the same time, while the T25E1 Medium Tank was considered, it was thought that it would negatively impact the production of the M4A3 Medium Tank and M24 Light Tank and, if it was introduced alongside the two tanks, it would not arrive in enough quantity to have any impact. The heavy role was to be filled by the T26E1 Heavy Tank, and both the light and heavy tank roles were supposed to be able to mount the 90 mm Gun and the 105 mm Howitzer.
In addition to the Tank Policy, the Army was in need of more tractors to haul towed guns of various calibers due to production of the M4, M5, and M6 Tractors (as well as Tractor Trucks) not being able to keep up with demand and the increasing production of towed gun carriages. The idea to convert M24 chassis into both Cargo Tractors and Armored Utility Vehicles was both sound and nothing new, as the idea had been previously considered and declined.

By October of 1944, it had been expressed in overseas theaters of operation, that a definite need existed for a General Purpose Tracked Cargo Carrier with low unit track pressure (PSI) and effective cross-country performance over difficult terrain. To meet this requirement, Ordinance prepared a design for a new carrier with a 7-ton cargo (6.4-tonne) capacity identified as the T33 Cargo Carrier. The vehicle was to be built from standard M24 Light Tank components, be unarmored, have a crew of two, and a .50 cal machine gun for A.A. work manned by the assistant driver. The unit track pressure was to be 6 psi (0.42 kg/cm2). Six pilot vehicles were authorized, but as of October 1944, no manufacturing facility had been located. Also recommended for official investigation was the previously mentioned armored tracked carrier based off the T33, the T13, now called a Personnel Carrier which had been previously reported on back in August of 1944[4]. 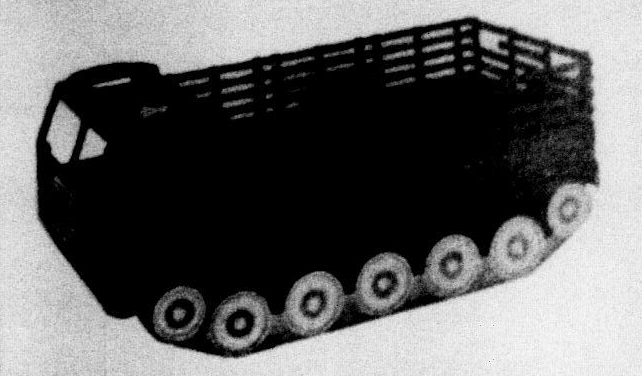 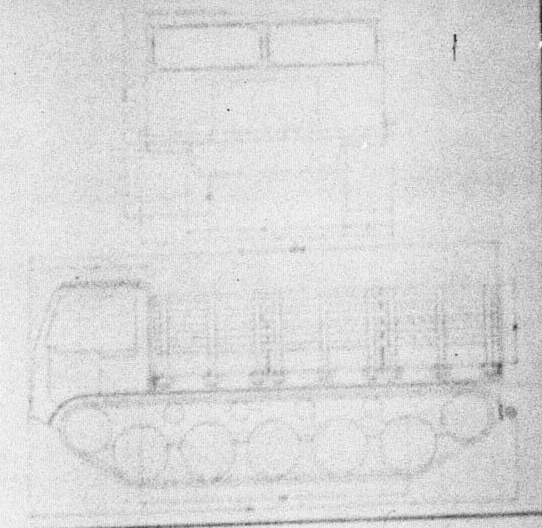 In November of 1944, the T33 Cargo Carrier became better described as 24,000 lbs (10.9-tonnes) (less crew, stowage and fuel) and 39,000 lbs (17.7-tonnes kg) combat laden in a cab over engine design at the front of the chassis.
The T13 also got official recognition as the T13 Armored Utility Vehicle in which the truck cab body of the T33 was replaced with an armored body ½” (12.7 mm) thick on the front, ½” (12.7 mm) thick on the side and 3/8” (9.5 mm) thick on the roof. The roof was lifted by means of mechanical jacks which raised it to any required position up to 6 ft (1.83 m) above the floor. The driver’s compartment accommodated the driver and co-driver with a ring-mounted .50 caliber machine gun over the co-driver. The main body was designed to accommodate 16 men in four rows of four leaving a small central aisle. This vehicle was estimated to weigh 31,000 lbs (14-tonnes) (less crew, stowage and fuel) and 39,000 lbs (17.7-tonnes) combat laden with the ground pressure being 7.3 psi (0.51kg/cm2).
The base carrier design was also intended to be suitable as an a) Armored Personnel or Cargo Carrier, b) Full Track Armored Reconnaissance Vehicle, c) Gun Motor Carriage, d) Litter Carrier and e)Full Track Armored Prime Mover.
The B.A.S. Royal Artillery S.D. and T. (R.A.) Monthly Letter to the War Office(RA) for December 7th, 1944 notes that the T33 had been approved for the production of six pilot vehicles[8]. The Technical Services Armaments Letter (TSAL) for November 29th, 1944 also notes this. Curiously, the British Army Staff (AFV) Situation Report (BASSR) Number 28 for November 18th, 1944 makes no mention of the six pilots for the T13 and both the TSAL and RA reports do and both reports cite BASSR #27 from October 18th, 1944.
By February 1945 and as a result of several user criticisms, the wooden mockup for T13 Armored Utility Vehicle was undergoing modifications and was not yet complete. In addition, six prototype T13 Armored Utility Vehicles were still on order but no delivery dates had yet been established[9]. 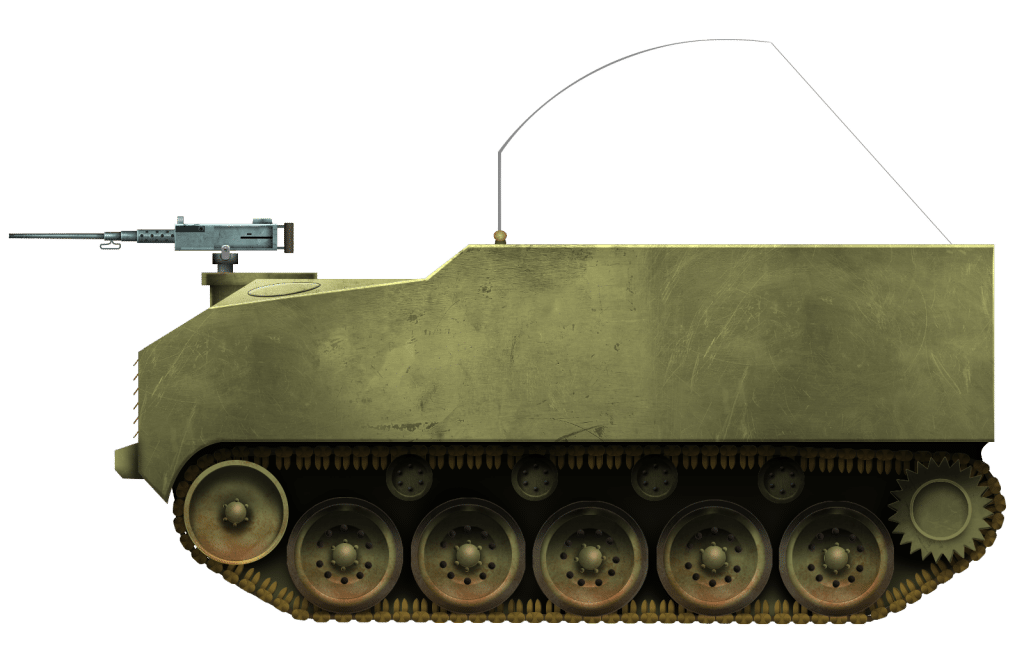 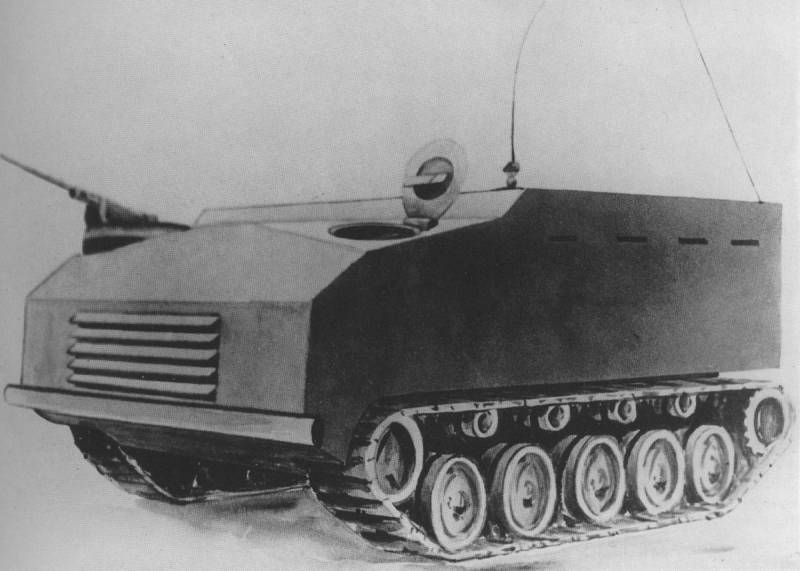 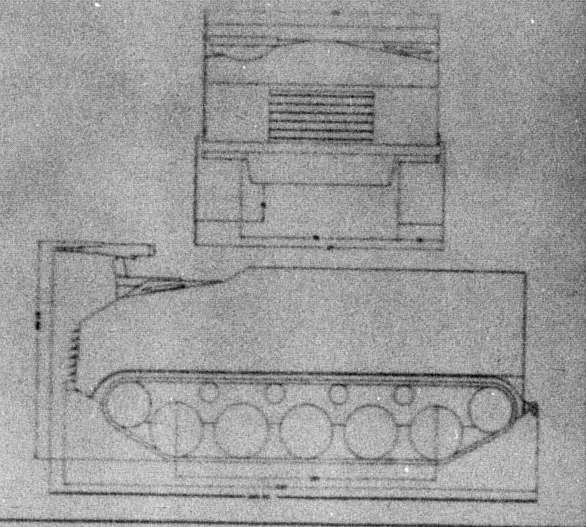 In March of 1945, everything changed for the T33 Cargo Carrier and T13 Armored Utility Vehicle. Cargo Carrier policy, as far as it affected the Armored Force and Tank Destroyer Command, appeared to the British to be focused around the T33 Cargo Carrier. The British at the time called the T33 an Armored Personnel Carrier. The discussion remained open as to if the overhead armored protection, previously mentioned back in November 1944, on the T13 was necessary as it was being contended at the time that its presence would prevent a complement of 30 men from leaving the vehicle speedily. On the other hand, it was also admitted that, with the development of the proximity fuse (VT Fuse), overhead cover was essential.
By the end of the month, the T33 Cargo Carrier was canceled in favor of the T42 Cargo Carrier/Prime Mover/Cargo Tractor. The T42 would be, at first, nearly identical to the T33 Cargo Carrier, but with the adoption of the M18’s 900-T Torquematic gearbox and the R-975-C4 radial engine as its powerplant. The T42 was also cross-adopted as a prime mover as Cargo Tractor T42 to replace the 18-ton High-Speed Tractor M4, a project that originally started in February of 1945.

Shouldn’t this be in WW II prototypes section?

That is correct. Sorry, had a brainfart when categorising it!

Not sure that the flag and country are correct at the top.