The Panzerabwehrkanone was the first german mass-produced AT gun. It was derived from a long line of 3.7cm (1.45in) horse-drawn guns, beginning with a 1925 specification from the waffenamt. The 3.7 cm Pak L/45 designed by Rheinmetall was largely produced from 1928, but had several obsolescent characteristics in 1933, including spoked wooden wheels. Modified along a new specification for a towed gun for motorized infantry units, it was designed as the 3.7 cm Pak 35/36 with magnesium alloy wheels with pneumatic tires. It was also made more compact and light, although enhancing its high velocity capabilities. Replacements began in 1934, and the baptism of fire occured in 1936 in Spain, with nationalist forces and lather the legion condor.
Improved as the PAK 36, it was then largely produced, derived as the KwK 36 L/45 for tanks, mainly the Panzer III. It was the main antitank gun of Germany prior to ww2, and was also largely exported, copied and built under licence by countries like China, Finland, Estonia, and was also largely distributed among the Reich satellites, namely Romania and Slovakia. The Russian 37mm Anti-Tank Gun M1930 (1-K) design based based on the first version of the Pak 36, and the Hungarian 40mm 40M was rebarreled with a 40mm Bofors.

The PAK 36 (for Panzerabwehrkanone model 1936) was a compact gun, 45 calibers, with just 327kgs (720 ib) in combat configuration, which allowed a crew of three to operate and move it quickly. Its main features were its large wheels and sloped shield, and good performance against armor ranging from 20 to 64mm (at short range – 100m). In fact, best performances were obtained against 22mm armors at a 1000m range, which was a relative “secure” range for the crews against tanks. See more in the characteristics.

The Rheinmetall Pak 36 was affected to all infantry divisions inside the Wehrmacht. It was largely available when the war began, and proced lethal in Poland, although experiencing difficulties against the well-armoured glacis of the polish French-built Hotchkiss H35 and the sloped armor of the 7TP. But in France, its limits came clearly into view, to the point that its own crews -as the enemy- famously dubbed them the “door-knockers devices” (Heeresanklopfgerät). There were barely efficient against many French infantry tanks, and particularly the B1 bis and the British Matilda II, which proved completely immune to this gun. In Russia, the Pak 36 did well against most of the Russian armor, including the largely available BTs and T-26, and only at short range on weak points against the T-28 and T-35. However, it was once again proven completely useless against the sloped armor of the T-34 and the impregnable KV-1.
A new munition has been introduced after the French campaign to improve its capabilities, the Panzergränat 40. It was a hollow charge with a Tungsten core, and bigger charge, which allowed greater range and better penetrating power, but was in limited supply. However, it was only by the introduction of the Stielgränat 41 by 1943, that the Pak 36 regain some real antitank capabilities against the most heavily protected tanks, although sacrificing the range. This heavy projectile was fitted on the muzzle, just like infantry rifle grenades.
Production of this model ceased in 1941. It was replaced by the more capable Pak 40 and Pak 41, but was available in such large provisions that it served with nearly all infantry units until 1944, on all fronts, from Africa to Europe and Asia.

The Panzerabwehrkanone model 36, standard infantry gun of the german army 1937-42. 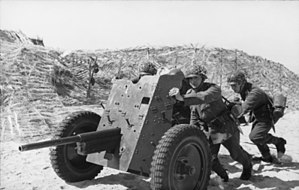 German infantry training with a PAK 36 in the north of France by 1944 (Bundesarchiv). 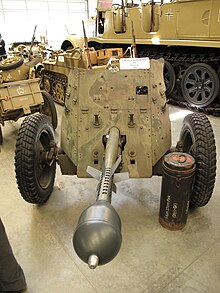 A PAK 36 fitted with a StielGranat 41, only introduced by 1943, first seen in Fallschirmjäger units. Due to the livery of the gun, it could have been used in Tunisia, but there are more chances of a non-accurate reconstitution… The Stiergränat was equipped with two fuses, and could deliver 2.42kgs of TNT through a hollow charge, a crushing blow against any armor, up to 180mm, at the expense of the range, 300m at best.

Video: The PAK 36 on Forgottenweapons.com

The Pak 36 on Wikipedia

It is a very untrustworthy source, but the Wikipedia page here says that Estonia had forty-four of the Pak 36s and that they had a special variant that had the barrel length at L/50 rather than L/45, making it 1.85 meters long versus the 1.66 meters long barrel of the L/45 version.
https://en.wikipedia.org/wiki/Former_equipment_of_the_Maav%C3%A4gi#Armor