The Fiat 3000 was the first mass-produced Italian tank and owed many of its design features to the French Renault FT. The Fiat 3000 would see action in most of Italy’s interwar conflicts and even right into the Second World War, though, by this time, the tank was seriously out-dated. The Fiat tank would also attract foreign attention and in 1924 the Kingdom of Spain purchased a single example for testing.

As a result of German, French, and British colonial competition, Spain was granted extensive control over North Morocco in addition to its already existing enclaves. In 1912, after signing a treaty with France, the Spanish protectorate in Morocco was formed, with an area of 20,948 square kilometers around the Rif. This increased presence in Morocco and the loss of most other colonies gave wings to the group of military commanders known as ‘Africanistas’ (with a vocation for Africa) and military and private operations were carried out in the area.
Spain avoided the slaughter of the Great War (1914-1918), but following a series of incidents, the Riffian Abd el-Krim led an insurgency which would evolve into the Rif War (1920-27). Early in the war, Spain suffered the ‘Disaster at Annual’, their biggest ever military defeat, and the Rif Republic was created, factors which in part led to the successful coup in Spain led by Miguel Primo de Rivera and his dictatorship. Soon afterward, in 1924, France intervened on Spain’s behalf and after the amphibious landings at Alhucemas (North Morocco) in 1925 with Spain using its Renault FT’s in the first amphibious tank landing in combat, the war was all but won. In these campaigns, Spain used its Renault FT’s and Schneider CA-1’s bought from France in addition to Spanish-made armored cars.

The Search for a New Light Tank

Although the FT’s were serving admirably in the ongoing Moroccan conflict, in 1924 the War Ministry wanted to carry out a study of light tanks which would form the country’s armored divisions. To that end, the Spanish government authorized the Artillery section within the Ministry to purchase an Italian Fiat 3000A for the price of 183,400 Italian lira in October 1924. The tank would not arrive in Spain until February 1925. After that it was given ‘ATM-984’ as its number plate and assigned to the Escuela Central de Tiro in Carabanchel, Madrid (a military firing range), to be put through a set of trials.
The results of the trials are unknown but it can be safely assumed that they were not a success given that no more vehicles were purchased and the tank was stored away. It seems as though the FT’s were viewed similarly and in 1925, an indigenous tank design heavily based on the Renault FT and named Trubia Serie A was developed by the Spanish firm Trubia and was possibly considered to be the replacement and future Spanish light tank.

After the unsuccessful trials and its rejection as the next Spanish light tank, ‘ATM-984’ was left at the Escuela Central de Tiro. Not much is known about its life after this, but it is assumed that the tank was either destroyed or scrapped in 1936 during the chaotic early stages of the Spanish Civil War.

For many years, the existence of a Fiat 3000 in Spain was regarded as somewhat of a myth. There was an agreement that the tank had in fact been ordered as there are documents to prove it, but there were doubts of its arriving and even more concerning the fact that it survived until the Spanish Civil War [For other controversies surrounding the arrival of another Spanish tank see Bolivian Vickers Mk.E article].
The controversy was cleared when this photo was released: Juan Antonio Luceño – right – Captain of the Estado Mayor de la 31 Brigada Mixta holding a piece of artillery ammunition. Date and location of the photo are unknown. The Fiat 3000 in the photo has often been mistaken with a Renault FT. Note, the image has been restored (original can also be found in link) – Photo: SOURCE
The existence of this photo of a Republican officer alongside the tank is clear evidence that the tank existed. Other photos suggest Luceño was in the tank corps in Madrid during the early stages of the Civil War and it can be assumed that this photo is of a similar time meaning the Fiat 3000 was in Spain and did survive until at least 1936.
Other photos are more complicated. This image has been put on the internet and has been claimed to represent the three tanks Spain had in 1925 – from left to right, the Fiat 3000, the Renault FT and the Schneider CA-1. However, this image is just a cropped version of an Italian photo of their tanks, which also includes a Fiat 2000 furthest to the right. Furthermore, the Fiat 3000 has an Italian triangle marking on the side of its’ turret. See photo below. SOURCE for both photos. 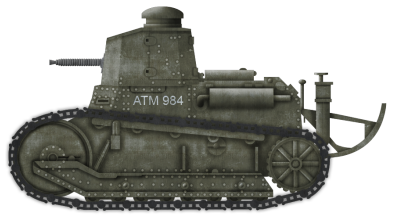 Rendition of the Spanish Fiat 3000. Illustration by Bernard ‘Escodrion’ Baker, funded by our Patreon Campaign.
The tank makes two further appearances in Spanish media of the Civil War period. ‘Fascist kid’ atop a Fiat 3000. This image depicts a child in fascist regalia atop a Fiat 3000. The image is thought to be the cover of the Pamplona francoist newspaper ‘Arriba España’, though this is probably not true. The photo was clearly not taken in Spain: 1. As explained, the only Fiat 2000 in Spain was on the Republican side; 2. The kid’s uniform seems to be that of the Italian fascist youth, not a Spanish falangist, and the rifle is the youth model of an Italian standard rifle; 3. The existence of very similar Italian war propaganda photos – see this PHOTO – where the kids are wearing the same uniform and may well have been taken at the same time. Furthermore, a fourth reason, which may also disprove that it was for ‘Arriba España’, is the way the inscription on the bottom is written. “Espana” is spelled without an eñe (ñ) – as it would be in Spanish – which may suggest the photo was part of a campaign for support for Spain within Italy. Photo: SOURCE Front cover of the Estampa magazine May 1st 1937 in which a Fiat 3000 can be seen under the title “nuestro tanques” – our tanks. Photo: ‘Nuestros tanques’ Estampa, 1 May 1937, cover.
This issue of the conservative pro-Republican magazine Estampa had tanks in Republican service as its main feature (The whole issue can be accessed HERE). The article uses a number of press photos throughout (an example is a photo on page 6 of Soviet twin-turret T-26 tanks during Soviet exercises) and it can be assumed that the cover with the Fiat 3000 is also a press photo. It is unknown if during trials the Spanish Fiat 3000 trained or was tested alongside infantry units, but even if it was, it is very doubtful if it was photographed and the photo probably corresponds to Italian Army exercises during the 1920’s.

This article hopes to shed light on a very confusing and often misinterpreted tank within Spain’s early armored history. A lack of concrete information has resulted in a few inaccuracies in otherwise respectable internet sources. Overall, it is clear that Spain did indeed purchase a Fiat 3000 in 1924 and conducted some testing of it. It is also certain that it remained in Spain until at least 1936, when it was in the besieged Republican capital of Madrid. After this, the fate is unknown as it may have been destroyed or scrapped.