War can bring about a wide variety of ideas from an equally wide variety of people and places, and one design from Australia came from the most unlikely of places; a prison.
The person concerned in this unusual tale is Prisoner ‘131’ – Jack Alva Heeney – who was, in April 1942, residing at his Majesty’s pleasure in Maitland Gaol, New South Wales, Australia. Heeney, a fitter by trade, was 52 in 1940 and serving a lengthy sentence. Heeney wrote from his cell to the Australian Army Inventions Directorate regarding a Cruiser tank he claimed to be of his own design, which he also claimed was already in the possession of the British War Office. 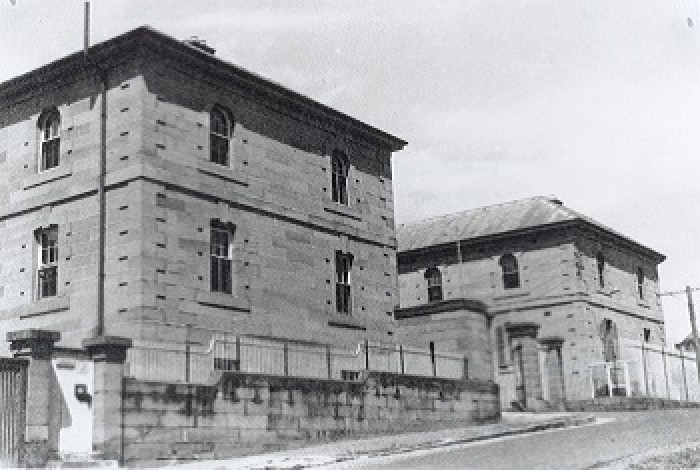 Maitland Gaol, New South Wales. Photo: Maitlandgaol.com.au
Heeney declared himself to be a former ANZAC (Australia and New Zealand Army Corps) who had served until 1918, participating at the Gallipoli landings and claimed to have invented a type of bomb-thrower used on ‘Walker’s Ridge’ fighting the Ottomans. Later, he said, he had served in “the China Conflict”, although his interest in tanks was spurred by time spent in France. Heeney further claimed that following the Civil War in Spain he decided to pursue his tank design further as he had, he stated, spent the 18 years preceding his letter (~1924) studying on-and-off improvements to “the War Tank” and that it had even been tested in at Charters Towers, Queensland, in 1936, although this seems extremely unlikely.
Heeney further claimed to have already submitted the design to the War Office in Great Britain, but that due to a shortage of funds they could not finish his design so relented until 2 months prior to the start of WW2 when he claimed the War Office wrote back to him for his idea offering to pay his expenses. Heeney, though, without a cash guarantee from the War Office stated that he declined to attend the War Office and instead wanted to offer the design to the Australian office.
Perhaps to emphasize how important and valuable this design was, Heeney claimed a man had tried to shoot him for them in 1937.
Heeney, does, however, provide a short description of his tank in his initial letter stating that it could dig trenches and bury itself completely. Fitted with four turrets “of the latest design” and that it was completely protected against poison gas. What is very odd in this letter, other than the obvious attempts to extract money from the recipient, is that Heeney claims there to be ‘seven secrets on this tank’ and that he also offered the Australian Army the design of the German ‘Star Fish Bomb’ which he claimed to have been stolen from Germany in 1924 saying explicitly that this bomb “was made to deal with the tank”. This does beg the question of quite how secret, novel, inventive, or ‘of the latest design’ this vehicle could really be, leading to a conclusion that Heeney may simply have been trying his luck with the War Office. A fact reinforced by his statement that his wife had already spent £800 (about £36k to £47k in 2018 values) on this tank and that “my people in New Zealand have interests” in it.
As a result of this letter though, a representative from the Army Inventions Directorate attended Maitland Gaol in June 1942 to interview Prisoner Heeney. During this interview (conducted with the permission of the Governor) it was revealed the Heeney planned to mount a 25-pounder gun in his design and that “a firm in Newcastle was willing to construct a tank of this type”. With just three months of his sentence left he would be free by October 1942 to pursue this outside the confines of the gaol. His proposal was that upon completing his sentence that he should collaborate with this unnamed firm in Newcastle on his design with the blessings of the Army.
Heeney provided the Army with sketches and specifications of this design which “is capable of digging itself in so that it does not become a target” and this information was forward up the chain of command in the Directorate.
The submission was rejected by July that year though as “nothing in this worthwhile referring to A.F.V. P.” and the original papers and sketches were returned to Arthur Griffith (Mr. Heeney’s Patent Attorney), although no patent for the design seems to have ever been filed.
Mr. Heeney, whose occupation was given as ‘blacksmith’, was, by June 1942, in the Army files, noted to have arranged a partnership with the firm of W.A. Miller, King Street, Newcastle for the construction of a prototype of his machine and the description provided at the time was:

The description then is more akin to the convertible wheel-cum-track Schofield tank from New Zealand than any British Cruiser, and whilst the 12.7 mm (½”) steel armor was not impressive, it would certainly be sufficient to keep out bullets and shell splinters. The 25 pounder gun though, is the really interesting part. The official Australian tank production development program had planned to mount this powerful gun in a tank as early as December 1941 but did not actually do so until the first half of 1942. Mr. Heeney was, therefore, absolutely up to date with some ideas about up-gunning tanks for the war effort. This gun would have been very well suited to fighting the particularly thinly armored Japanese tanks of the era and for supporting the infantry, although, in the end, the 25 pounder armed Cruiser would never be adopted; an opportunity missed for Australia. As such, one has to give credit to Mr. Heeney for consideration of this weapon for his design regardless of how realistic the design may or may not have been.
By October 1942 and the time of his release from Maitland Gaol, Heeney was claiming to have spent some 14 years of study developing the design (rather than the 18 years he had claimed earlier in his correspondence). The design had not been patented as he claimed as he was waiting for some interest before doing so, as the filing would cost him £7, 7 shillings. He had, however, engaged a reputable firm of patent attorneys to act on his behalf and stated that the plans and arrangement to build the machine were ready to go.

Artist’s impression of Wentworth’s Cruiser tank based on his description.

Artist’s impression of the trenching conveyors at the front of the tank.
These illustrations were produced by Mr. C. Ryan, funded by our Patreon Campaign.

The name and identity of the designer/inventor warrants examination as the inmate submitting the design is given as Prisoner 131 – Jack Alva Heeney – but in some correspondence, he is referred to as ‘T. Heeney’ instead. In his June 1942 interview, the Army lists him as Mr. Jack Alva Wentworth using the name Heeney and note calmly that he was currently serving a sentence for 12 charged of False Pretences, Larceny as Bailee, Forging and Uttering in New Zealand 1942.
Those charges are confirmed in the 3rd January 1940 edition of The Evening News (Queensland) where ‘Jack Alva Wentworth’, aged 52, pleaded guilty to 8 charges of false pretenses. For that court proceeding, his occupation was given as a ‘fitter’. The details of the offenses related to the fraudulent cashing of cheques in the names of J. Holmes, A. Holmes, and J. Jones, although in one offence he mistakenly signed it ‘G. Holmes’. The fact though, that he calls the design the ‘Wentworth Cruiser Tank’ and not the Heeney Cruiser tank is probably a good indicator that his real name was, in fact, Wentworth.

Mr Heeney or Wentworth, depending on which name he really was known by, was a criminal and clearly not a very good one. Between May 1925 and January 1940 he had amassed no less than 39 separate convictions which perhaps explains those 18 years of ‘tank study’ he mentioned in his opening letter. It is hard to know what to believe from the pen of Mr. Heeney therefore. A multiple times convicted criminal with a penchant for fraud and the use of multiple aliases. In his defence at court in 1940, he stated that “I have been in this sort of trouble since the War… when I am drunk I am not responsible for my actions”. Whilst he may have been drunk when he committed those crimes he did claim his wife had died in 1939, just three weeks before his conviction in January 1940 begging the question of just how she had spent £800 pounds on his tank by 1942. Heeney/Wentworth, a native of New Zealand, stated his intention to just go back home. Perhaps this was just an elaborate ruse by a hardened felon to con money from the government, or perhaps it was the last chance of a former soldier to serve his country with a genuine attempt to design and deliver a tank for the new war. Whatever the reason though, the design have been lost to time and the potential of his ideas was never realised. The fate of Mr. Heeney/Wentworth following his release in October 1942 is not known.

Interesting! will the schofield tank be next?

Nothing to do with the tank – if Heeney/Wentworth committed his offences in New Zealand, why was he serving time in an Australian prison?

According to newspaper articles from the period Heeney/Wentworth had committed several instances of fraud (a possible 60 incidences according to one article) throughout both New Zealand and Australia.
The crimes that he was convicted for in 1940 were committed in the town of Rockhampton, in the Australian state of Queensland, hence his incarceration in Australia.
TE Moderator