After the British Army introduced the Mark I tanks on the battlefield for the first time in September 1916, the German War Ministry responded by ordering several German firms to design and produce a prototype for a similar war machine. One of the approached firms was Hansa-Lloyd based in the city of Bremen, which came up with a working design. Ten prototypes were planned to be built. The engineers of Hansa-Lloyd, having no experience with designing either armed or armored vehicles, came up with a big-wheel design which they called Treffas-Wagen. A single prototype was completed on February 1, 1917. The Treffas-Wagen seen from the left front. The armament is not installed. The rear wheel is turned. Source: Landships

The company Hansa-Lloyd Werke A.G. was set up in 1914 as a merger between Hansa-Automobil GmbH, established in 1905, and Norddeutsche Automobil- und Motorenwerke Aktiengesellschaft (NAMAG), established in 1906, which owned and produced the Lloyd car brand. The firm was located in Bremen in the Hastedt subdistrict, part of city district Hemelingen. Producing cars, trucks, and tractors, the firm had no experience with building any kind of armored vehicles when they were approached by the German War Ministry in September 1916 to build one. The director of Hansa-Lloyd, Robert Allmers, was part of the A7V committee in which several other representatives and leading experts of the German industry were seated.

The vehicle is easily recognizable by its two wide and large front wheels, with a diameter of roughly 3 meters. Between these two large wheels, an armored fighting compartment was located which extended to the back in a tail-like shape. At the very end of this tail, a castor like steering wheel was attached which gave the vehicle a tadpole tricycle layout. The engine delivered enough power to reach the maximum speed of 10 km/h. The fighting compartment housed a crew of four; a commander, a driver, a gunner, and a loader. The armament installed during initial tests consisted of two Panzerbüchsen (AT rifles), which were capable of penetrating the British Mark I tank’s frontal armor.

What guns these were is a bit unclear, with sources either mentioning a Mauser type or 2 cm TuF guns. After some tests, the armament was removed. An alternative design, although never executed, saw the use of a 5.7 cm Maxim-Nordenfelt gun, the same gun as used in the Sturmpanzerwagen A7V tank.

A design drawing of the Treffas-Wagen which is called ‘Version I’, armed with a 5.7 cm Maxim-Nordenfelt gun, the same as on the Sturmpanzerwagen A7V tank. This drawing differs from the built prototype in the design of the ‘tail’. The pipe above the tail is the exhaust pipe. Source: Landships

When the vehicle was subjected to thorough tests in February and March of 1917, many fundamental problems were encountered. The guns had such a powerful recoil that, after firing just a few shots, the gunner could not continue shooting due to significant head and shoulder pains, which raised grave concerns over the vehicles operational ability. Another issue was the center of gravity which was too far forward. When driving over a ditch, there was a high chance the vehicle would flip itself, which actually happened during a test in the summer of 1917. The vehicle dug itself in, got stuck, and eventually flipped itself over.

All issues combined, this vehicle had serious engineering problems caused by the design, which is not so strange given that this vehicle was one of the first of its type and the first armored vehicle designed by Hansa-Lloyd. On May 14, 1917, a demonstration was held which included the Sturmpanzerwagen A7V wooden mock-up, the Orion-Wagen, the Dür-Wagen, and the Treffas-Wagen. After these trials, the OHL (Oberste Heeres Leitung – Supreme Army Command) concluded that the Treffas was unfit for combat use and rejected the design. Besides the fact that the vehicle did not perform very well, a reason for the rejection was the better alternative design, the Sturmpanzerwagen A7V tank, built by Daimler-Motoren-Gesellschaft, which went into serial production in October, the same month in which the Treffas was dismantled. The back of the vehicle, taken in the same area as the other picture. The height of the vehicle can be appreciated when compared to the man standing next to it. Source: Motorbuch Verlag 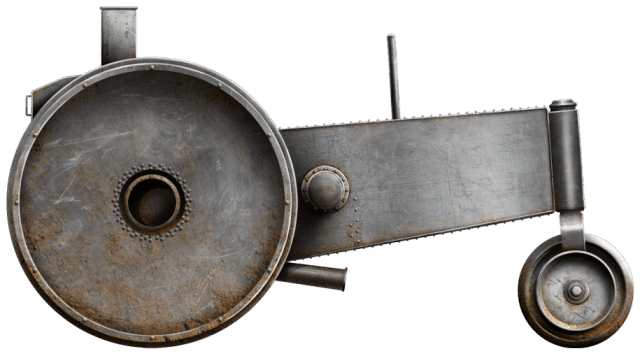 The Idea of Big Wheel Tanks

The idea of armored big wheel tricycle vehicles emerged in other countries as well, most notably the Tsar Tank from the Russian Empire, although this vehicle was developed from a rather different perspective, and had different design problems. A vehicle, a bit more similar to the Treffas, was the Steam Wheel Tank developed in the US, although this vehicle had a delta tricycle configuration instead of a tadpole tricycle. The Steam Wheel Tank in itself is said to be a development of the Big Wheel Landships designed in Britain in 1915.
There were two main reasons why big wheels were thought to be practical, the first being that larger wheels make more ground contact which could reduce ground pressure, improving off-road maneuverability. The other reason was that large wheels can more easily overcome obstacles.

Although the Treffas-Wagen was the only Big Wheel vehicle built during the First World War and interwar period in Germany, during World War Two, a similar vehicle was built by Lauster, called the Wargel LW 3. Although the vehicles were not related, they do show similarities. Baffled by the introduction of the tank, the German War Ministry hastily ordered several armored war machines. Although looking promising on paper, the Treffas-Wagen turned out to be a failure due to fundamental flaws in the design. The vehicle was scrapped in October 1917 and the experience gained by designing and testing the vehicle was never used in future projects. The Treffas-Wagen was one of many armored vehicle projects that never passed the blueprint or prototype stage in the German Empire during the First World War.

Tanks Encyclopedia Magazine, #2
The second issue of the Tank Encyclopedia magazine covers the fascinating history of armored fighting vehicles from their beginnings before the First World War up to this day! This issue covers vehicles such as the awe-inspiring rocket-firing German Sturmtiger, the Soviet SMK Heavy Tank, the construction of a replica Italian Fiat 2000 heavy tank and many more. It also contains a modeling section and a feature article from our friends at Plane Encyclopedia cover the Arado Ar 233 amphibious transport plane! All the articles are well researched by our excellent team of writers and are accompanied by beautiful illustrations and period photos. If you love tanks, this is the magazine for you!

Buy this magazine on Amazon!