Chimera was a British School of Tank Technology study design to develop a casemated Armoured Fighting Vehicle (AFV) that could make constructive use of the remaining, dated FV4201 Chieftain Tanks then still in service. It is worth noting that there are several ‘Chimeras’, the UK not being one to throw a good name away and recycled it for several other projects. For the sake of brevity, all reference to Chimera in this text will refer to the 1984 version.
The project was part of the British LAIC (Long Armour Infantry Course), formerly known as the Tank Technology course. It had been renamed due to the expanding mechanization meaning that infantry now had an equivalent need to understand the technical aspects of the equipment they were operating and officers were invited from various Commonwealth nations.
This particular Chimera began in 1984 as part of LAIC number 35 at the Armour School, part of the Royal Armoured Corps Centre at Bovington, Dorset. The course involved a study to find a cheap and effective way to make a Self-Propelled Anti-Tank Gun on the Chieftain chassis that was to utilize new armor and technology but still be cheaper to produce and operate than the new FV4030 Challenger 1 main battle tank that was entering service.

The result was a casemated design; the turret was removed, the gun was built into the hull and traverse was done by moving the whole vehicle left or right, much in the same way as the Jagdpanzer IV or Jagdpanther late war German tank destroyers. This design concept has several pros and cons over conventional turreted tanks. It lowers the overall profile of the vehicle and allows the placing of heavier armor over the front of the vehicle increasing its survivability. It often allows a more powerful gun to be fitted, however, this comes at a cost of only being combat effective to targets approximately 45° in front of it and less able to defend itself against threats to its flank and rear like a turreted MBT. This type of vehicle is ideally used as an ‘ambush’ weapon: laying in wait in a concealed location then changing location as soon as it fires its gun to another preplanned position to avoid detection.
As mentioned above, aiming was done by steering the vehicle to the left or right should the target be out of the vehicle’s primary arc of fire and therefore such machines are particularly vulnerable if the tracks are damaged. Having to start the tank’s engine and move the whole vehicle to bring the gun into position to fire on an enemy vehicle can reveal its position. This is not ideal. As the Germans found out in the Second World War, if used as a defensive vehicle they can excel, however, it’s their unsuitability for offensive deployment that highlights their greatest flaws. Used in place of conventional tanks, they will inevitably struggle against anything not approaching head-on. Finally, as a side note, they tend to be very long which can cause logistics issues and maneuvering issues around bends or corners.
The overall hull of the Chieftain was lengthened and an extra road wheel added to help take the weight of the Chobham frontal armour which was to be twice that of Challenger 1. It also helped to move the centre of gravity more to the centre. One issue found by the Germans and the Russians, particularly in the later heavily armored casemated vehicles, was that the extra frontal weight put undue stress on the forward suspension often resulting in them having steel road wheels at the front. By increasing the overall length of the hull, it helped to alleviate this somewhat.
The weapon was initially designed around the L11 120 mm rifled cannon gun with the early 1980s muzzle reference system mirror and shroud above the muzzle. This is sometimes marked up as the XL30 120 mm gun which was a considerably more powerful 120mm piece originally designed for the MBT-80 MBT. The XL30 also had the advantage of being shorter yet more powerful than the L11 and could use either the old ammunition or the new CHARM rounds entering service.
The frontal armor was incredibly thick for its time. It was 610 mm to 700 mm of Chobham armor on the upper half of the glacis angled at 20° or the equivalent of about 1400 mm of conventional Rolled Homogeneous Armor (RHA), yet considerably lighter at 2141 kg per ‘cheek’. The lower front of the vehicle was 110 mm of steel at 34° for 132 mm effective frontal plate, enough to stop cannon fire and older Soviet era 100 mm rounds at a distance but vulnerable to more modern rounds. It was envisioned such a vehicle would be deployed hull down ideally, therefore the lower plate would be out of sight and could not be targeted.
The roof section or slope leading up to the midway point was also conventional steel but 122 mm of it angled back at 80° for nearly 700 mm effective armor. The side armor was split between very thick on the upper half and thin on the lower half. Above the track line it was 310 mm thick along the sides for the first 50% of the hull and then dropped to 40 mm for the latter half. The lower side armor remained the same as Chieftain at 40 mm. The rear, back deck and bottom were 25 mm each. Two ‘bazooka’ plates protected the tracks along the sides and these were overlaid with 30 mm applique layers over the first 2/3 of either flank. The total armor weight for the vehicle was 32.5 tons.
Power was supplied by a late model L60 multifuel engine, likely to have been the 12A/N model (formerly known as 14A), giving at 750bhp. By this time, many of the older issues with the L60 had been rectified and although still somewhat temperamental its performance had increased dramatically over the earlier engines. It was also proposed to fit the Rolls Royce MBT-80 engine in this vehicle, replacing the L60. The MBT-80 engine was a 1500 hp unit able to squeeze 2000 hp when required (a less ambitious version of 1200-1500 hp ended up in the Challenger).
The crew was to consist of four men: the commander and gunner on the right hand side; the driver and loader on the left hand side. Both commander and loader have their own hatches which double as entry exit for the gunner and driver who does not have a conventional hatch. Optics were provided by 4 episcopes for the commander and 5 for the loader, the gunner had his own day/night thermal system. Close protection was given by a 0.5″ heavy machine gun remote weapon station located either over the main gun or to the side of the loaders hatch. 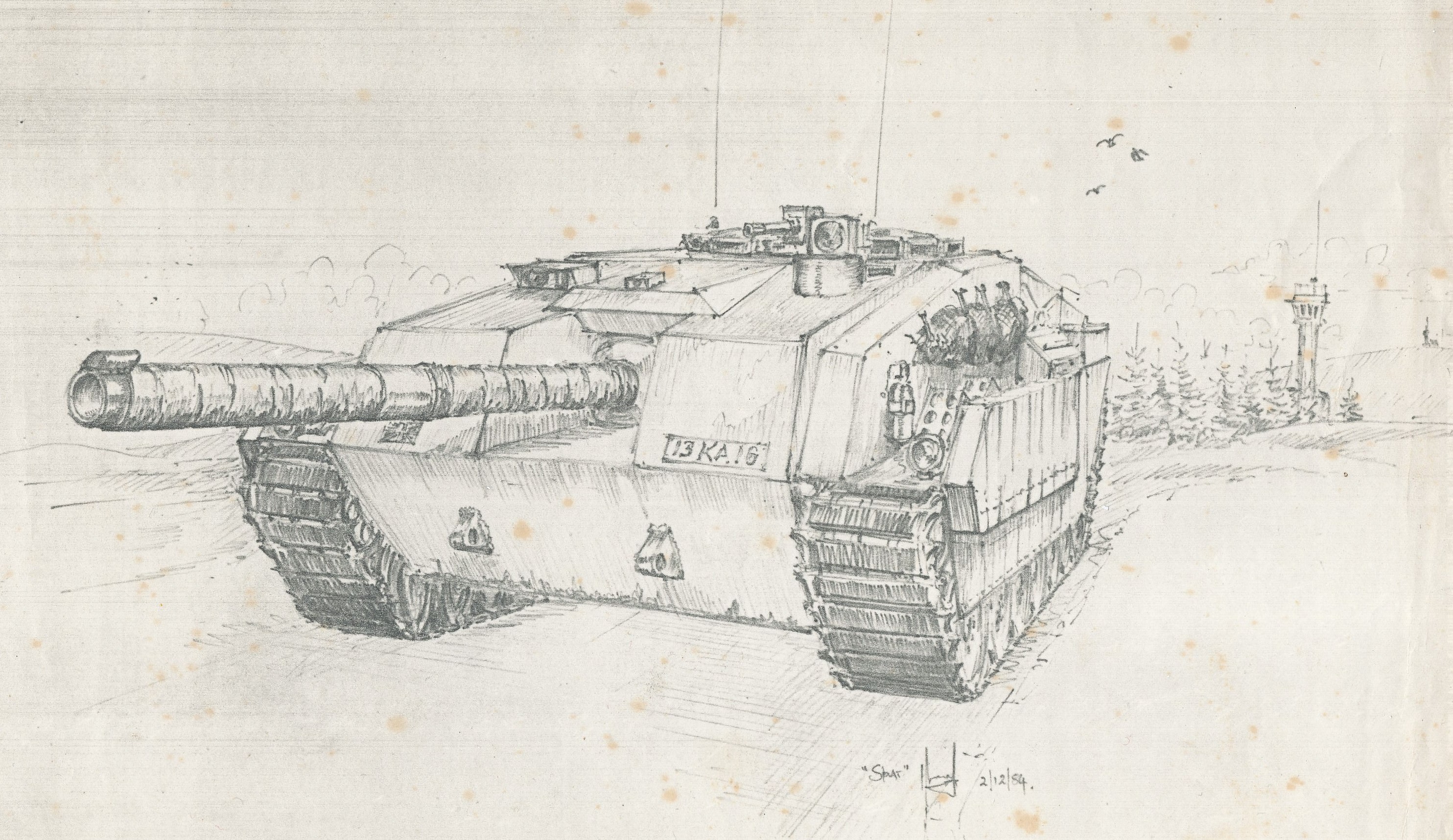 A handmade drawing of the Chimera 1984 tank destroyer, made in 1984. It closely matches drawings from official documents and is probably an original piece relating to the project – Source: Army.ca

The vehicle was built up as far as a large model and presented before a board of MOD and UK leading tank experts in 1985, where it was viewed as successful in achieving the targets set and the project was effectively filed away. No orders were given for modifications to start on the remaining FV4201 Chieftain Tanks still in British Army service. A similar but later design for a casmated Chieftain known as the Combat Test Rig or CTR and erroneously as the Jagdchieftain had also been carried out. However, that was part of the FMBT-70 program and unrelated to this project.

Side note: Tank versus tank

Tank Versus Tank: The Illustrated Story of Armoured Battlefield Conflict in the Twentieth Century is a 1988 book by Kenneth Macksey. It covers tank construction, development, technology, tactics and strategy from the first appearance of the tank on the battlefield up to the Yom Kippur War in 1973. The last chapter of the book deals with a “What-if scenario”, seeing an invasion of NATO by the Warsaw Pact somewhere in Central Europe. For this, Macksey presents the Goliath, an ‘assumed’ advanced tank destroyer used by NATO forces. However, the images presented are of the Chimera 1984 tank destroyer! The Goliath-Chimera is described as being able to reliably survive a frontal hit from the latest Soviet APFSDS rounds while taking out the latest Soviet MBTs at more than 1000 m. This is one of the few cases of a fake ‘fake tank’ in AFV history.

A 1990s battlefield envisioned. The NATO forces are on the left, with the Goliath-Chimera tank destroyer in the small village. Source: Tank versus Tank

Side view of the Goliath-Chimera tank destroyer. Source: Tank versus Tank 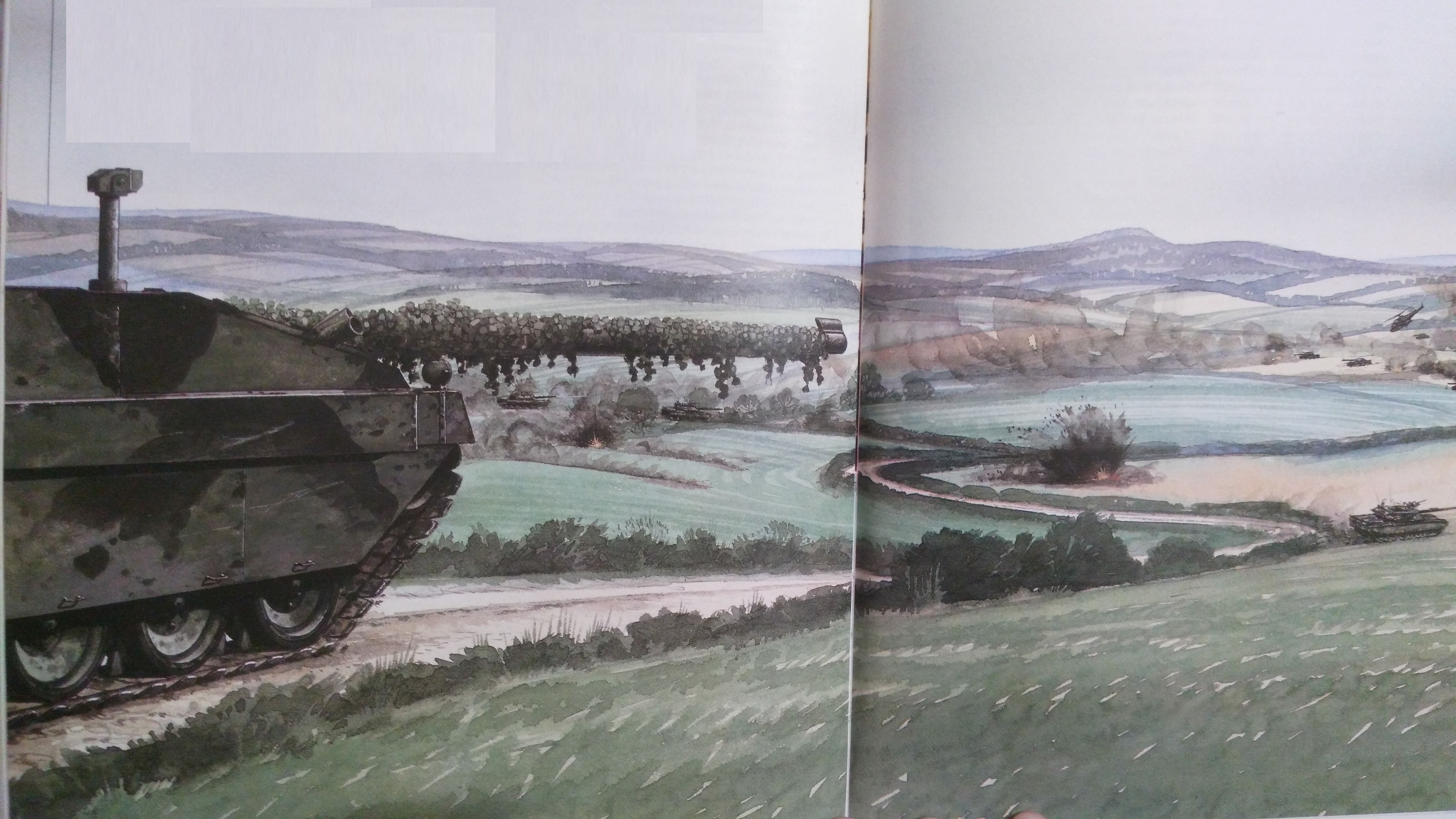 A 3D model of the Chimera tank destroyer, probably done by a private modeller. Source – Quora

The 1984 Chimera tank destroyer in NATO colors. Illustrated by Jaroslaw “Jarja” Janas, paid for with funds from our Patreon campaign.

Hi,
Interesting piece – mostly pretty much spot-on in terms of what we aimed to achieve within the LAIC 35 Chimera project team back in 1984. I was on the team and was responsible for the overall design. I did all the formal general arrangement drawings (including that side view), and worked with the model-maker at Bovington to create the approx tenth-scale model which was then taken to Canada for a rather more serious discussion about using the design; hence the maple leaf on the side of the model in the photo. The “handmade drawing” of the frontal view is mine as well – (not sure about copyrights etc!!).
Goliath ? The name was not familiar to us on the course – perhaps Macksey was aware of the two UK TD projects (which were run separately), as well as the Canadian passing interest in a TD variant, and used the name Chimera/Goliath to avoid certain classification issues. Who knows?
The project was fun but we knew that it was in reality only a way of using up the stocks of Chieftain hulls and components at a time when Challenger 1 was entering service. However, the serious aspect of this, as well as the other TD research project run by the UK MOD, was that 1983 had been a dangerous year in terms of East-West showdowns and there was a genuine desire to be able to field a cheap and relatively simple vehicle that had immense armour and firepower that could be manned by reservists in a defensive North European battlefield with limited training and without costing the earth.
LAIC was not just for Commonwealth countries. There were German, French, US, Swiss and other officers on our course – as well as Canadians and Australians. It was an expensive course for overseas students which meant that it was out of reach for many Commonwealth forces. The British element were not alwys sent on the course as a result of their defence-technology skills! It meant that overseas students were often very highly qualified with Masters in science of some sort. So the co-operative projects such as the Chimera were a source of constant amusement to the Brits who generally knew their stuff instinctively whilst the others spent hours working with slide-rules and calculators to get to the same answer – albeit with a few extra decimal places of accuracy!

Hello Hammick,
Very glad to see your response and input!
As to the copyright, it probably belongs to your employer at the time. But we would be more than happy to credit you as the author if you so desire.
All the best!