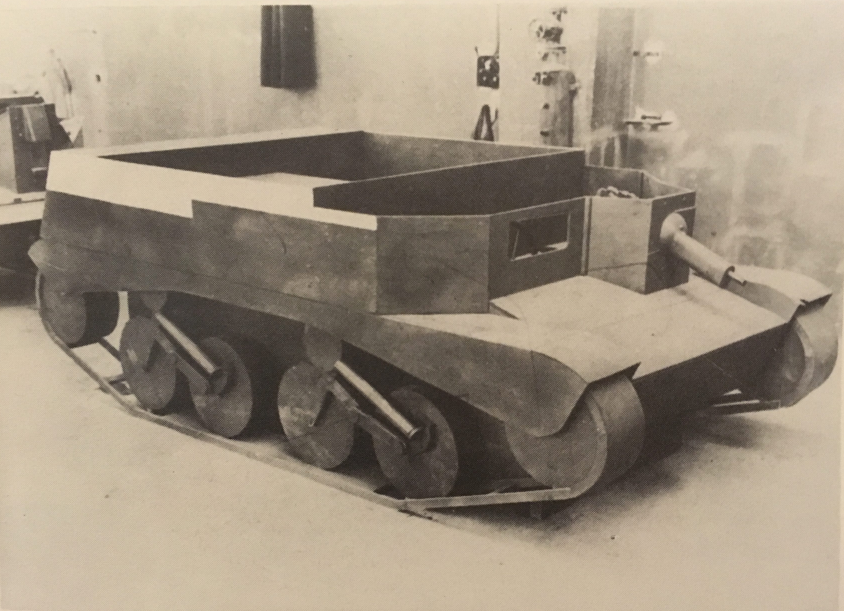 Fiat 2800 ‘CVP-4’
Having turned their backs on their traditional British allies and going to war with them in the North African desert, the Italians once again found themselves able to examine British equipment. Not purchased this time, but captured. One of the most notable vehicles captured was also one of the most widely produced armored vehicles ever, the ubiquitous ‘Universal Carrier’. Various types were captured in the Western Desert and returned to Italy in 1941 for examination and testing. As a result, two Italian vehicles were spawned , the CVP-4 and the CVP-5. In a secret memo dated  24th May 1941, amongst other studies being conducted for light armored vehicles and personnel carriers, was a comment questioning whether a vehicle such as the British Universal Carrier would be appropriate.

The Italians then, had decided to manufacture two competing designs of armored carriers, the CVP-5 from Ansaldo and a rival design from Fiat, the CVP-4. The CVP-5 was produced first and was submitted to CSEM (Centro Studi ed Esperienze della Motorizzazione) on 2nd February 1942 for trials and evaluation. Despite being produced first, testing was stopped awaiting this second design. The requirements had been for a small tracked vehicle using, as far as possible, commercial parts so as to speed up production.
To this end, the Fiat design used a commercial engine, the Fiat 2800 (hence the reason the vehicle is sometimes called the Fiat 2800) connected to the gearbox of the L37 prime mover and delivering drive through the rear axle of an SPA 38R truck. This design proved problematic however, due to insufficient cooling of the engine which led to a redesign of the unit. The suspension was a direct copy of that used on the British Universal carriers. 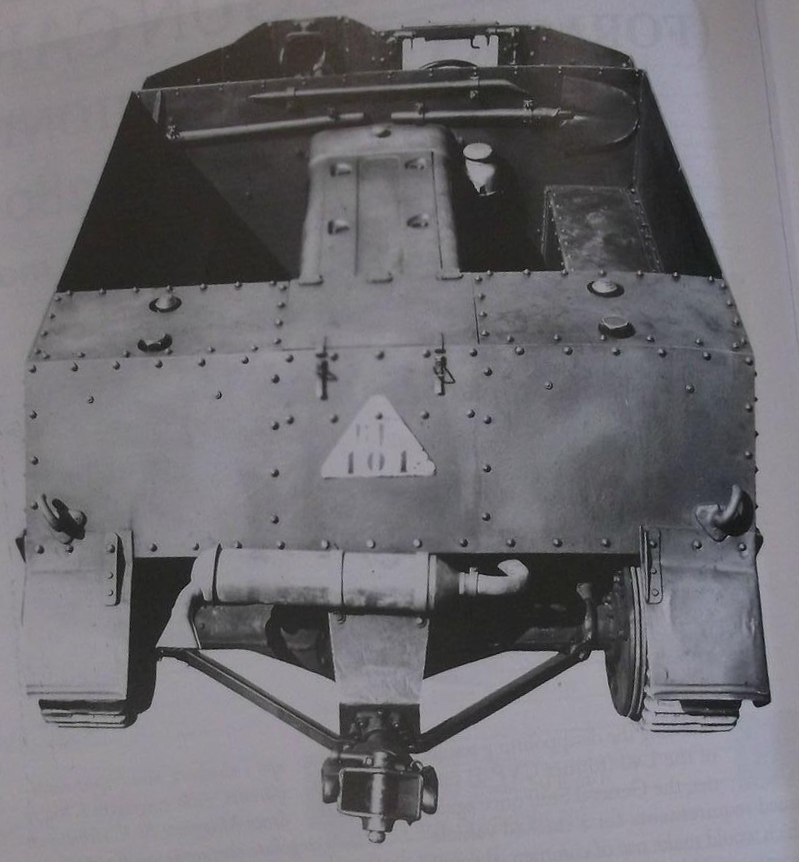 Early prototype fitted with Fiat 2800 engine – note the lack of grille in the rear as was amended to improve air flow for cooling
For a name, this small vehicle actually had many. It was known variously as the Cingoletta Fiat 43, Fiat 2800, CVP-4 Camionetta, and ‘the Model 42’. Why it took so many names to develop what is effectively a direct copy of the British Universal Carrier is not clear, but is perhaps an indication of the convoluted and troublesome nature of its development. Either way, the delays meant that the CVP-4 was not delivered for trials until December 1942. It is remarkable that the CVP-4 took so long to be ready for tests considering not just that they had captured British vehicles to examine, but the CVP-4 was only marginally better than the British original. The armor on the CVP extended slightly further back than the Universal Carrier. It was also a little heavier and lower to the ground.
Armament was limited to a single 8mm Breda machine gun fitted into a ball mount in the front of the vehicle to the left of the driver, who sat at the front right hand side.

The CVP-4 was eventually tested against the CVP-5 and the differences were marginal. Both had acceptable performance off-road and there was some debate over whether to replace the Fiat 2800 engine with the larger, more powerful Astura 3000 engine coupled to a new selective gearbox although this was not actually done.
Regardless, the CVP-4, like the CVP-5, was accepted into service. It was 1943 and the war was not going well for Italy so they needed vehicles urgently. All the delays for testing only managed to deny the Italian Army the vehicles it needed for various support roles, hauling guns, scouting, and transport.
Upon adoption in February 1943, the CVP-4 was standardised as the Cingolette 43 and 300 of them were ordered from Fiat. 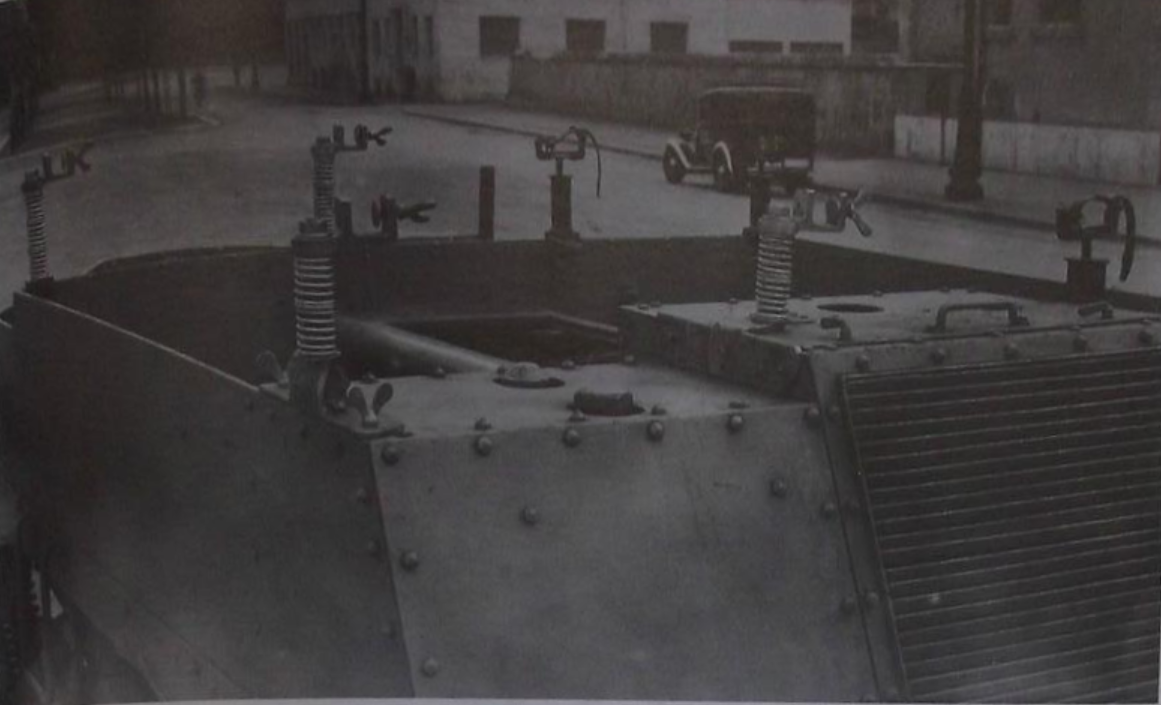 ‘Ambulance’ version seen from the rear left-hand side. The spring mounted clamps hold a stretcher in place for the patient, who is hopefully strapped in for a precarious ride. Note the difference at the back in this production vehicle to the prototype with a new large cooling grille.

The role of the CVP-4 was primarily the same as the role fulfilled by the Universal Carrier in British service, transporting a machine gun or anti-tank team, and for towing light guns. A trailer was available to help carry stores and ammunition, although it was limited to a combined (trailer and load) weight of 1000kg. 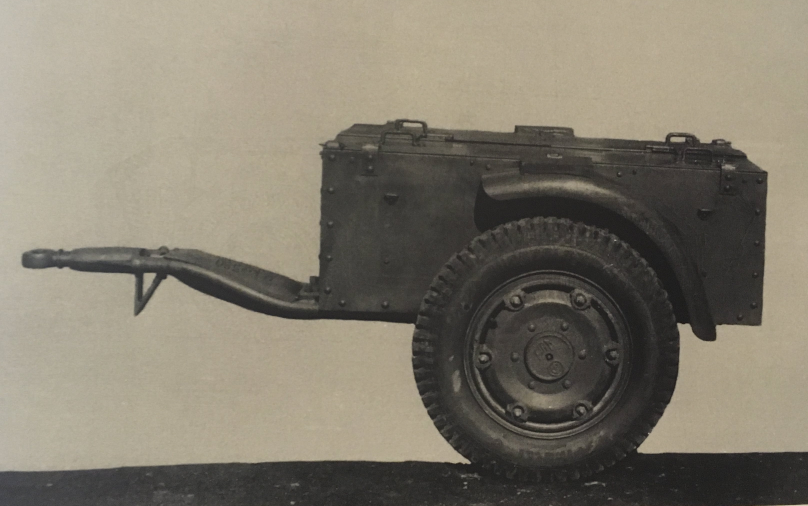 1st and 2nd pattern ammunition trailers made by Viberti for the CVP-4 and CVP-5
An ambulance version was also postulated to evacuate injured troops. A vehicle was modified to demonstrate the means of carrying stretchers mounted above the protection of the vehicle, but this concept had not been completed before the September 1943 armistice and was abandoned.

Captured Bren carrier on the left with the CVP-4 centre and CVP-5 on the right. Image date December 1941. It can be seen that the CVP-4 is not yet ready.
At the time of the armistice in September 1943, the military value of such a vehicle was so low that it was not worth disrupting the production of tanks and other arms. The Germans, in effective control of northern Italy, abandoned production and focussed on other vehicles already in production. The exact number of vehicle finished is unknown and likely extremely low, and none are known to have seen service with either the Regio Esercito (Royal Army), the Germans, the Repubblica Sociale Italiana (RSI), or partisans.